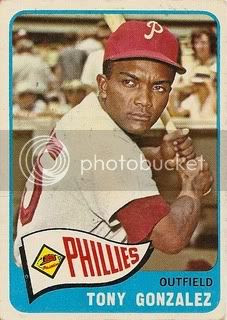 There's a lot more crowd action in the background of Tony Gonzalez's photo than you usually see on 1960s cards. If you're reading this and you recognize yourself as one of those blurry faces, pipe up and leave a comment.

-A native of Central Cunagua, Cuba, Tony signed with the Reds (then known as the Redlegs) in 1957.

-After hitting 55 home runs in 3 minor league seasons, he made the major leagues at the outset of the 1960 season. In his April 12 debut, the 23-year-old helped Cincinnati erase a 4-0 deficit and win 9-4. He singled off of Robin Roberts in his first at-bat and scored on a Jerry Lynch double, and later added a two-run home run off of Roberts.

-Despite his initial success, Gonzalez fell into a slump and was traded to the Phillies in mid-June with a .212 average. He got acclimated quickly, hitting .299 in 78 games with a .485 slugging percentage. Overall, he hit .274 as a rookie.

-Tony slammed a career-high 20 home runs in 1962 and boosted his average to .302 while playing errorless ball in center field.

-He ranked in the top ten in hit-by-pitch in eight different seasons, and is credited as the first major leaguer to wear a helmet with a molded earflap.

-Gonzalez's best overall season was 1967, when he ranked second in the National League with a .339 average and fifth with a .396 on-base percentage.

-After being chosen in the expansion draft, he began the 1969 season with the Padres but was traded to the Braves in June. He hit .294 with 10 home runs and 50 RBI in 89 games to help Atlanta win the first N.L. West title, and then batted .357 (5-for-14) in a losing effort in the NLCS. In Game 1, he homered, doubled, and drove in two runs against Tom Seaver.

-He played in Japan for the Hiroshima Toyo Carp in 1972 and returned to the Philly organization in 1973, batting .345 in 45 games for AA Reading before finally hanging up his spikes. 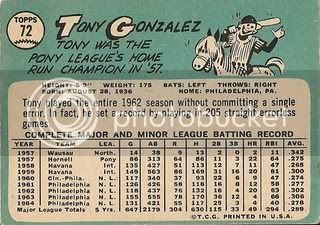