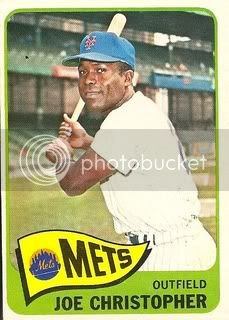 Maybe it's a trick of perspective, but my goodness that bat looks tiny. Was Joe hitting fungoes?

-Joe was born in Frederiksted in the Virgin Islands. He signed with the Pirates in 1955.

-Became the first native-born Virgin Islander to play in the majors when he debuted at age 23 on May 26, 1959. That game became famous for Harvey Haddix's 12-inning perfect game.

-After three seasons as a backup to the likes of Bob Skinner, Bill Virdon, and Roberto Clemente, he was the fifth selection of the Mets in the expansion draft prior to the 1962 season.

-A famous anecdote has the bilingual Christopher teaching center fielder Ashburn to say "Yo la tengo" ("I got it") to call off shortstop Chacon on fly balls. The first time Ashburn uttered the phrase in a game situation, burly left fielder Frank Thomas ran him over. Thomas got up and said, "What the heck is a yellow tango?".

-Joe worked in an ad agency in New York for some time, and later moved to Baltimore. His passion is drawing. 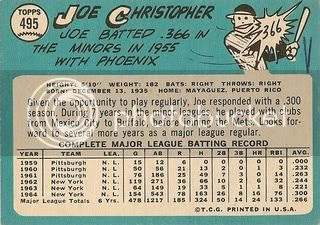