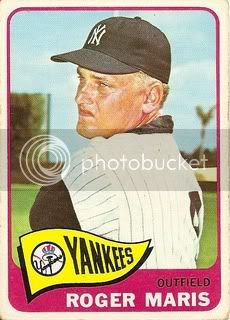 Perhaps you've heard of this guy. In my ongoing attempt to catch up, I've moved to another small batch of cards that Max sent ages ago. By now I can't remember what was sent when, and what I sent in return. But this card (and its partner to be posted tomorrow) are proof that good things come in small packages.

-He was born Roger Maras in Hibbing, MN to Croatian immigrants. He grew up in Fargo, ND and was a high school football star. After a semester at the University of Oklahoma, he left school and signed with the Indians in 1953.

-The young player changed his name to "Maris" in the minors, where hecklers were known to taunt him as "Mare-Ass". He let his bat do the talking, hitting .303 and slugging .509 in four seasons in the bus leagues.

-Roger made the big league squad at the beginning of the 1957 season. Playing the majority of the Tribe's games in center field, the 22-year-old batted only .235 but walked 60 times for a .344 on-base percentage. He also hit 14 home runs and drove in 51.

-He split his sophomore season between the Indians and Athletics. Though his on-base percentage dipped under .300, but doubled his home run output and boosted his RBI total to 80.

-After making his first All-Star Game in 1959, Maris was acquired by the Yankees in a lopsided trade. 1960 was his breakout year, as his 39 home runs were only one shy of teammate Mickey Mantle for the league lead. Roger did capture the American League RBI (112) and slugging (.581) crowns, and batted a career-high .283. He squeezed past the Mick by just three points to capture the A.L. MVP, and won a Gold Glove for his handiwork in right field.

-Though his first MVP season established Roger's bonafides as a power hitter, his performance in 1961 was still stunning. With offense around the league boosted by the addition of two expansion teams, Maris and Mantle spent the season trading home runs and challenging the 34-year-old record of Babe Ruth. The introverted Maris grew weary of the scrutiny from media and from hostile fans who deemed him unworthy of breaking a hallowed mark set by a larger-than-life figure. An injured Mantle stalled at 54, but Roger hit the record-breaking 61st home run off of Boston's Tracy Stallard on the last day of the season. Commissioner Ford Frick overstepped his bounds by declaring that the new record would be branded with an asterisk, since it had been achieved in a 162-game schedule, compared to the 154-game slate that Ruth had played in 1927. An official action was never taken, but Maris was still hurt by the criticism. Nonetheless, he repeated as A.L. MVP, as his 141 RBI earned a share of the league lead with Jim Gentile. He also topped the junior circuit with 132 runs scored and 366 total bases.

-Roger stuck around for seven seasons after his outstanding 1961 campaign, remaining a productive contributor to strong Yankee squads in 1962-1964 before an injury-plagued 1965 spurred New York to trade him to the Cardinals, where he finished his career as a role player for a pair of pennant-winning squads.

-He participated in an impressive seven World Series during his career: five with the Yankees and a pair with the Cardinals. He batted only .217 in 41 postseason games, but totaled 6 home runs and 18 RBI. His clubs won it all in 1961, 1962, and 1967.

-After retirement, St. Louis owner Gussie Busch set Roger up with a Budweiser distributorship in Gainesville, FL. He coached baseball at nearby Oak Hall High School. In 1983, he was diagnosed with Hodgkins Lymphoma. The Yankees retired his #9 the following season, and he passed away in December 1985 at age 51. In 1998, both Mark McGwire (70 HR) and Sammy Sosa (66 HR) broke his home run record, and Barry Bonds hit 73 three years later. Subsequent revelations about performance-enhancing drug use have led to some stubborn fans insisting that Maris is still the true single-season record holder. 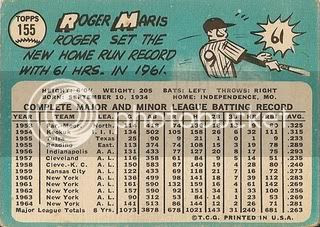