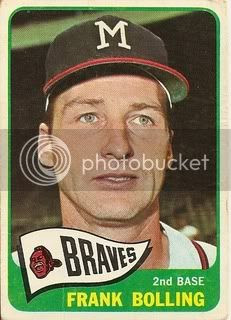 -Born in Mobile, AL, Frank attended his hometown's Spring Hill College and signed with the Tigers in 1951.

-Frank hit .299 in three minor league seasons before becoming Detroit's starting second baseman as a rookie in 1954. He batted .236 with 6 home runs and 38 RBI that year.

-In 1958 Bolling won a Gold Glove and was joined on the Tigers by brother Milt. He showed some power, cracking 25 doubles, 14 home runs, and a personal-best 75 RBI. He also led the team with 91 runs scored.

-In December 1960, Frank was traded to the Braves in the Bill Bruton deal. He would be selected to the National League All-Star team in each of his first two seasons in Milwaukee, boosted in part by the 15 home runs he hit in 1961 to tie a career high.

-On September 22, 1965, he hit the penultimate home run of his career in the Braves' last-ever home game in Milwaukee. It was also his only grand slam, and the only grand slam allowed by the great Sandy Koufax during the last four years of the lefty's Hall of Fame career!

-In 10 of his 11 full seasons, he was top-four in his league in fielding percentage at second base, and retired with a .982 overall mark. He never played a single inning at any other position.

-He became involved in charity work back in Mobile and founded the Frank Bolling Adaptive Baseball League, the first Little League for mentally and physically challenged children. 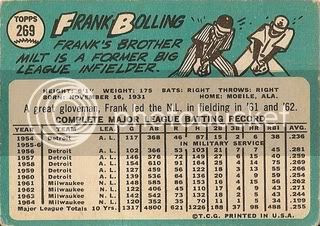