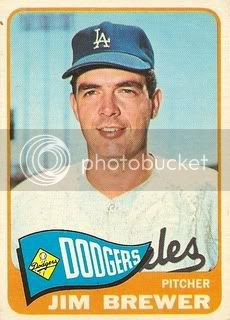 -Jim was born in Merced, CA and attended high school in Oklahoma before signing with the Cubs in 1956.

-He debuted with the Cubs in July 1960 at age 22, but was put out of commission in his fifth game. After a brushback pitch to Cincinnati's Billy Martin, the short-tempered infielder threw his bat at the rookie. When Brewer attempted to calmly hand Martin the bat, Billy punched him in the eye, breaking his cheekbone and hospitalizing him for two months. Jim pressed charges, and Martin was finally ordered to pay his victim several thousand dollars in damages in 1969.

-After struggling in four seasons in Chicago, a trade to the Dodgers invigorated Brewer. He quickly became an ace reliever, relying on a screwball to baffle right-handed hitters. In 1964, he had a 3.00 ERA in 93 innings in his initial season in L.A. His rate of 7.6 hits allowed per nine innings would actually be his worst mark in 11 full seasons with the team.

-On September 16, 1969, he earned wins in both ends of a doubleheader by throwing a combined five innings of shutout ball against the Reds. He allowed only two hits and struck out five.

-Brewer got into coaching after hanging up his spikes, spending three years as the Expos' pitching coach followed by eight years at Oral Roberts University. In 1987, he coached in the Dodgers farm system. In November of that year, he was killed in a head-on car crash in Tyler, TX the day before his 50th birthday. 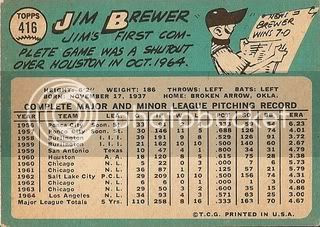