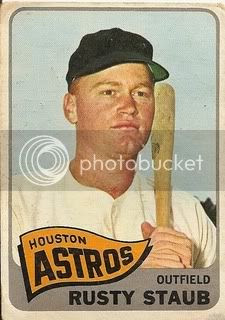 Is there anything better than a Friday? How about a Friday with an early-career card of Le Grand Orange?

-Born Daniel Joseph Staub in New Orleans, LA, Rusty signed with the Colt .45s straight out of high school in 1961.

-Staub steadily improved and made his first All-Star team in 1967, when his .333 average was fifth-best in the league and his .398 on-base percentage ranked fourth. He also led the N.L. with 44 doubles.

-In 1969, he joined the new Montreal club in the would-be Donn Clendenon trade (more information here). In addition to his great on-field play (he was an All-Star in all three years of his Expos tenure and holds the franchise record with a .402 on-base percentage), the local fans embraced him for the effort he took to learn French. His number 10 jersey was retired by the club.

-Another trade sent him to the Mets in 1972 for Mike Jorgensen, Tim Foli, and Ken Singleton. Rusty was crucial to New York's 1973 pennant-winner with a team-leading 76 RBI, 36 doubles, and .361 on-base percentage.

-In his only postseason experience, Staub powered the Mets past the Reds in the 1973 NLCS with three home runs, five RBI, and a game-saving catch in the eleventh inning of the deciding fourth game. He injured his throwing shoulder crashing into the fence, robbing him of arm strength for the duration of the World Series. Nonetheless, the big redhead gave the victorious A's all they could handle with a .423 average (11-for-26) with a pair of doubles and a home run in the seven-game Fall Classic.

-He split 1979 between the Tigers and Expos, and made a one-year stop with the Rangers before concluding his long and productive career with a five-year stint back with the Mets. He became a valuable pinch-hitter and player-coach in New York, tying an N.L. record with eight straight successful pinch hits in 1983 and equaling an MLB record that same year with 25 pinch-hit RBI.

-He has worked in TV broadcasting for the Mets and his interest in culinary arts and wine has led to ownership and operation of two restaurants: Rusty Staub's and 1271 Third Avenue. He also established a namesake charitable foundation and a benefit fund for children and widows of New York police and firefighters killed in the line of duty. In 25 years, the foundation has raised hundreds of millions of dollars. He's a member of the Mets and Texas Baseball Halls of Fame, and his high school (Jesuit High in New Orleans) annually gives the Rusty Staub Award to the leader of the varsity baseball team. 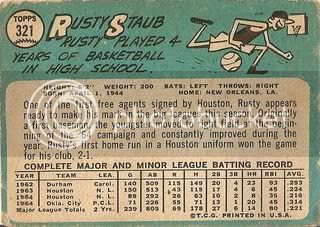