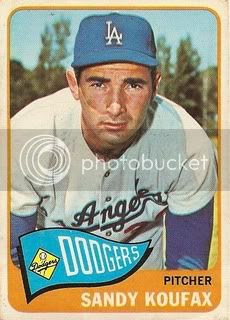 It should go without saying that this card is one of the crown jewels of my 94% complete 1965 set. A number of the big-ticket players (Aaron, Clemente, Mantle) are still missing, but Max was good enough to pass Sandy Koufax along to me. I love the pose in this photo, too; it looks like he's staring down a batter and receiving signs from Johnny Roseboro.

-A native of Brooklyn, NY, Sandy briefly attended the University of Cincinnati. He tried out for the Giants and Pirates before signing with the Dodgers for a $14,000 bonus in 1954.

-As a "bonus baby", he had to go straight to the majors at age 19 in 1955. The Dodgers used him sparingly, but he did grab attention with a pair of shutouts for his first two big league wins. The first of these was a spectacular two-hitter on August 27 in which he struck out 14 Cincinnati batters.

-Early in his career, Koufax struggled to harness his gifts. In three of his first four full seasons, he struck out more than ten batters per nine innings, yet he was also routinely among the top five in the league for most walks allowed. Through the 1960 season, his record was a mediocre 36-40 with a 4.10 ERA and 5.3 walks per 9 innings.

-Fully healthy in 1963, the lefty entered the stratosphere, winning both the Cy Young and MVP awards with N.L.-leading numbers including wins (25-5), ERA (1.88), shutouts (11), strikeouts (306), WHIP (0.88), hits per nine (6.2), and strikeouts-to-walks (an absurd 5.28). He kept the good times rolling with complete-game victories in both of his World Series starts against the Yankees, including a 2-1 win in the sweep-clinching Game Four. He earned Series MVP honors with an overall ERA of 1.50 and 23 strikeouts in 18 innings.

-Koufax captured his second Cy Young in 1965, thanks to career highs of 382 strikeouts, 27 complete games, an 0.86 WHIP, 5.8 hits per nine, and 5.38 strikeouts to every walk issued. He also topped the league with 26 wins, a 2.04 ERA, and 10.2 K/9. He also repeated as World Series MVP with two shutouts of the Twins and an 0.38 ERA in the Fall Classic; he allowed a single earned run in six innings in a Game Two loss before blanking Minnesota in Games Five and Seven.

-He twirled four no-hitters in his career, a record since broken by Nolan Ryan. The most impressive of these may have been a perfect game on September 9, 1965 in which he struck out 14 Cubs. The game was notable because the Dodgers had only one hit and three base runners themselves, and they scored the only run off of unfortunate Cubs starter Bob Hendley via a throwing error by catcher Chris Krug.

-Sandy stunned the baseball world by retiring at age 30 after the 1966 season, another superlative year in which he won his third Cy Young with a 27-9 record and 1.73 ERA (both personal bests). He also struck out a league-best 317 batters and was runner-up in MVP voting for the second year in a row. However, arthritis in his pitching arm was causing him constant agony, so he got out while he could. 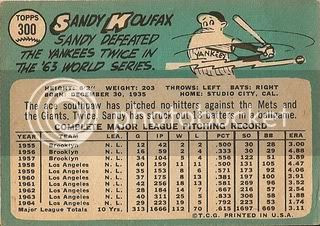