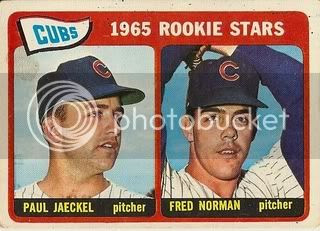 Sheesh, more rookies? I never realized there were so many of these cards in the 1965 Topps set. Neither of these guys look like they have started shaving.

-Paul (referred to as "Jake" on Baseball Reference) was born in East Los Angeles and signed with the Cubs out of high school in 1960.

-On September 24, 1964, Jaeckel earned a win in his second big league game. He relieved starter Dick Ellsworth to begin the eighth inning with the Cubs trailing the Dodgers 3-1. The rookie allowed a single hit in two scoreless innings, though he made things interesting by throwing two wild pitches in the ninth before catcher Jimmie Schaffer picked Maury Wills off of third base. The Cubs picked up a run in the eighth and two more in the ninth, with Ron Santo's sacrifice fly scoring Jimmy Stewart to clinch the victory.

-A week later, Jake got his first career save in his next outing, another 4-3 win over L.A. This time, he bailed out starter Cal Koonce in the eighth inning. Koonce had allowed three straight singles, plating a run and bringing the go-ahead run to the plate. Jaeckel entered with nobody out and induced an RBI groundout that plated the third Dodger run. He retired the next two batters to quell the threat, then escaped a jam in the ninth. Leadoff hitter Tommy Davis had doubled, but was gunned out at third by catcher Vic Roznovsky. The young pitcher slammed the door on the home team by striking out Willie Crawford.

-His impressive major league stat line consisted of a win, a save, and a spotless ERA comprising four two-inning stints of scoreless relief.

-Jake never made it back to the major leagues, spending two more seasons in the Cubs farm system and an additional year split between the Cardinals and Angels' AA squads before hanging it up in 1967. His unimpressive minor league record was 49-70 with a 4.28 ERA.

-Fred hailed from San Antonio, TX and signed with the Athletics as a teenager in 1961.

-The Dodgers finally gave Fred an extended look in 1970, when he was 27 and in the midst of his tenth pro season. He put up a bloated 5.23 ERA in 62 innings, and was dispatched to St. Louis late in the year.

-The Cardinals dealt the southpaw to the Padres in June 1971, and he proved he belonged in the National League with a 3.32 ERA in 20 games (18 starts). Of course, you wouldn't be able to tell that by looking at his 3-12 record for the 100-loss Friars.

-On September 15, 1972, he struck out 15 Reds batters in a 1-0 victory. Every Cincy batter, including pinch hitters Julian Javier and Hal McRae, fanned at least once.

-Fred earned World Series rings with the Reds in 1975 and 1976, despite struggling in his Fall Classic appearances in both years. He did earn a win in Game Two of the 1975 NLCS by holding the Pirates to a single earned run in six innings. 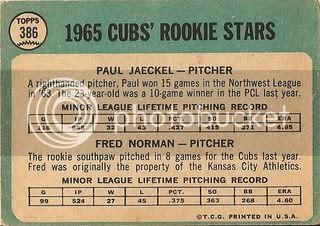