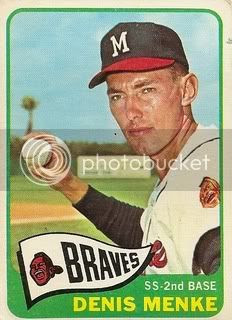 Look at the palm tree behind Denis Menke. It makes me wish that I were going south with pitchers and catchers next week.

-Throughout his career, Menke played regularly at all four infield positions, but most often at shortstop.

-In 1964, he achieved career highs with 29 doubles and 20 home runs while slugging .479. He was only 4 home runs behind Hank Aaron for the team lead in 46 less plate appearances.

-He joined the Reds in the Joe Morgan trade prior to the 1972 season and played third base for back-to-back N.L. West Division Champions. Though he managed to bat a scant .191 in 1973, he had a keen batting eye and drew 69 walks, giving him an on-base percentage of .368!

-Denis served as a minor league manager for the Brewers and Blue Jays, compiling a 198-220 record from 1977 through 1979. He went on to spend the next two decades on the big league coaching staffs of the Jays, Astros, Phillies, and Reds. He's currently retired and living in Florida. 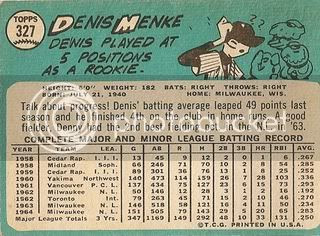