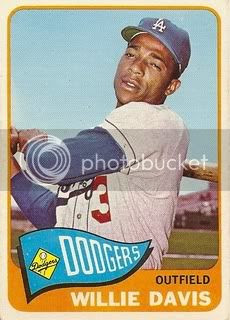 Apparently Kenny Rogers wasn't the first ballplayer to assault a cameraman. Willie Davis looks like he's following through on a mighty clout after Topps' shutterbug got too close for comfort. Of course, I'm being facetious. Willie was a convert to Buddhism, and probably wished photographers no ill will.

-Willie was born in Mineral Springs, AR, but grew up in Los Angeles, where he starred in baseball, basketball, and track and field at Theodore Roosevelt High. The Dodgers signed him out of high school in 1958.

-He participated in three World Series with the Dodgers, ending up on the winning side in 1963 and 1965 and on the losing end in 1966. Though he had an overall average of just .167 (9-for-54) in these games, his two doubles and two RBI were crucial in a Game Two win over the Yankees in 1963. In Game Five of the 1965 Series, he stole three bases, including one in which he stumbled but crawled safely into second base as the pitcher hesitated before throwing to the base!

-He was traded four times in less than two calendar years, going from the Dodgers to the Expos (for future Cy Young-winning reliever Mike Marshall) to the Rangers to the Cardinals to the Padres from December 1973 to October 1975. When San Diego released him in January 1977, he spent two seasons in Japan before concluding his career as a part-timer with the Angels in 1979. In parts of 18 seasons, he hit .279 with 2,561 hits, 154 home runs, 849 RBI, and 335 steals.

-In true fashion for a Californian, Davis was bitten by the acting bug. He appeared in guest roles on Mr. Ed, The Flying Nun, and Owen Marshall: Counselor at Law. He also costarred with Jerry Lewis in the 1970 comedy Which Way to the Front?

-Willie died of natural causes in his burbank home in March 2010. He was 69 years old. 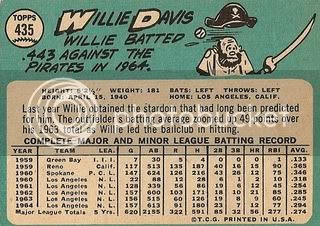