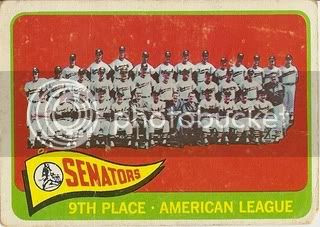 Wow. This card looks like Christmas threw up on it.

Anyways, you probably know the old saw about Washington: "First in war, first in peace, last in the American League." Well, thanks to a six-game improvement and the wretchedness of the Kansas City A's, Gil Hodges' Senators narrowly escaped the cellar in 1964 with a 62-100 record. I'm sure that was small consolation, as they finished 37 games behind the pennant-winning Yankees and a full 10 games back of the 8th-place Red Sox. The Sens were still last in the league in attendance, with 600,106 stubborn fans paying their way into RFK Stadium.

Washington's offense was missing in action, pushing across 578 total runs; only the Angels (544) scored fewer. The club had an A.L.-worst .231 average and .299 on-base percentage. The only statistical category in which they placed higher than seventh was strikeouts - with 1,124 whiffs, the Senators fanned more often than any other team. Center fielder Don Lock led them in on-base percentage (.346), slugging (.461), runs (73), home runs (28), and RBI (80). Left fielder Chuck Hinton was the only All-Star, as he paced the club in batting (.274), doubles (25), and triples (7). Right fielder Jim King finished a distant second on the squad with 18 homers and 56 RBI.

When assigning blame for the Sens' 100-loss season, there's plenty left for the pitchers. They were dead-last in the A.L. with 26 saves and 794 strikeouts, and third-worst with a 3.98 ERA. As you might imagine, it was not a stable pitching staff. An unfathomable 15 different men started at least one game, and only Claude Osteen and Buster Narum took the baton more than 24 times. The 24-year-old Osteen (15-13, 3.33 ERA, 13 CG) was the only starter with a winning record. Fireman Ron Kline (10-7, 2.32 ERA, 14 SV) was the glue that held the bullpen together.

In their decade in D.C. (1961-1971), the second incarnation of the Senators played losing baseball in every season but one. Ted Williams was hired as manager in 1969 and temporarily gave the club's hitters a boost, engineering a 21-win jump to an 86-76 record. Even that was good for only fourth place in the six-team A.L. East. In 1972, owner Bob Short moved the team to Texas, where they became the Rangers and continued to sputter. It would take until 1996 for the franchise to make its postseason debut, and they did not win their second-ever playoff game until 2010, when they finally advanced to the World Series only to lose in five games to the Giants. Washington went without a baseball team of any caliber until 2005, when the Expos left Montreal and became the Nationals, the third team in MLB history to call the nation's capital home. That team, of course, has five last-place finishes and a fourth-place finish to its name. The more things change, the more they stay the same. 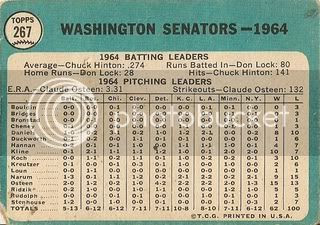