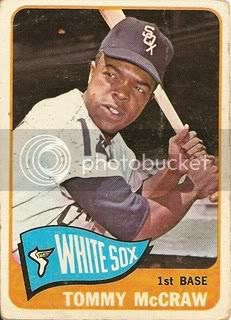 It's interesting to note that Topps went with "Tommy" for McCraw's 1964 and 1965 cards. Subsequently, they switched to "Tom". For what it's worth, Baseball Reference goes with "Tommy".

-A native of Malvern, AR, Tommy attended high school in Culver City, CA before signing with the White Sox in 1960.

-McCraw was 22 when he debuted in the majors in June 1963. He started 69 games for Chicago at first base, batting .254 and tying for the team lead with 15 steals. It was the first of eight seasons in which he recorded double-digit steals.

-Three of Tommy's 1967 homers came in one game on May 24. He took Twins starter Dean Chance deep with one aboard in the fourth and again with two on in the seventh, and added another three-run shot against Jim Kaat in the ninth. Add it up, and you've got eight RBI, a personal best.

-He was one of the top defensive first baseman in the league, leading in range factor for three years straight and placing top-five in total zone runs five times.

-His ninth-inning home run off of Oakland's Fred Talbot on September 14, 1969 broke an 8-8 tie and gave the Pale Hose a wild walk-off win.

-Joined the Senators in 1971 for their final season in Washington. His RBI pinch single on September 30 was the last hit in Sens history. Two batters later he was caught stealing on the final offensive play in team history. He then stayed in the game at first base and recorded the last putout. It was only the second out of the ninth inning, but the fans at RFK Stadium rushed the field. Although the home team was winning 7-5, the umpires declared a forfeit and the Yankees won.

-McCraw jumped right into coaching, serving as Frank Robinson's batting instructor in Cleveland. Over the next three decades, he also held the same post with the Giants, Orioles, Astros, Mets, Expos, and Nationals. 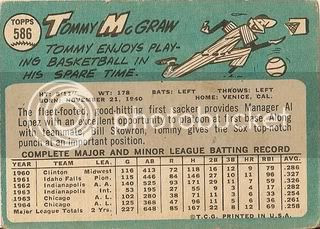