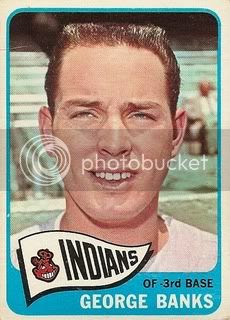 I bet George Banks had to get up pretty early in the morning to give his hair that perfect squared-off look. I still think it looks better than the currently fashionable "faux-hawk", however.

-The Twins must have been thrilled to claim him in November 1961's Rule 5 draft. He made his major league debut on April 15, 1962, popping out to second base as a pinch hitter.

-His final home runs in the majors came on September 22, 1964. It was the only run allowed by Hall of Famer Whitey Ford in an 8-1 Yankee victory.

-Unfortunately, Lou Gehrig's Disease (ALS) took George's life at age 46 in 1985. He was buried near his birthplace in South Carolina. 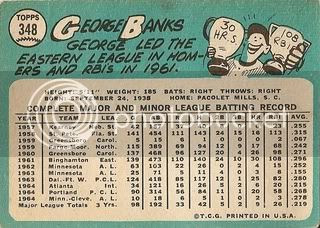