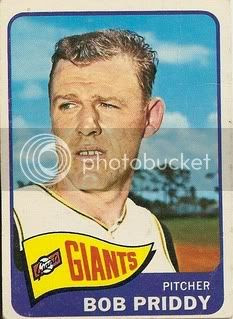 Given the sophomoric humor that is often associated with baseball players, I imagine that it couldn't have been easy being a pitcher named Priddy.

-Bob was born in Pittsburgh and signed with the Pirates out of high school before the 1959 season.

-He debuted in the majors at age 22 on September 20, 1962, earning the win with a ninth inning of scoreless relief. He had entered with the Bucs trailing 3-1, and notched the victory when Bob Bailey hit a walkoff two-run double off of Cincinnati's Bill Henry.

-The following year, Bob was traded to the Senators and set career bests with a 3.44 ERA and 4 saves in 46 games.

-On June 19, 1968, Priddy hit his only career home run, a solo shot off of Luis Tiant of the Indians. It was the only run Tiant allowed in a 3-1 Tribe victory.

-After bouncing from Chicago to California to Atlanta in 1969, he finished his career with two so-so seasons in the Braves bullpen. In parts of 9 seasons he was 24-38 with 18 saves and a 4.00 ERA.

-His 18 saves are the most all-time for a native Pittsburgher. 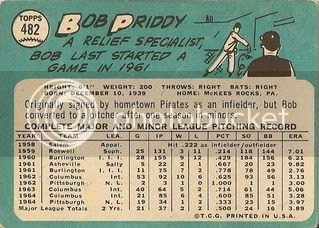