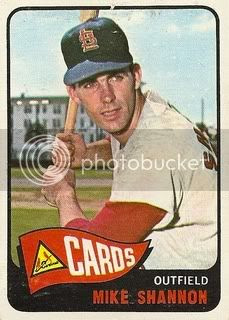 We take a break from our regularly scheduled Max Marathon to present the fruits of the biggest all-1965 Topps trade I've conducted. This deal went down May of 2009, and my partner in crime was Kris Shepard of Cards in the Attic. I sent him 11 doubles that I'd acquired from Jamie (whose gargantuan contribution was featured on this blog in recent months), and in return he sent the 11 cards that I'll be posting over the coming weeks. We start today with Mike Shannon's uncorrected error card. His name is in red letters, whereas the rest of the Cardinals had yellow lettering. In my opinion, it looks cooler than the yellow-on-black motif.

-Mike was born in St. Louis, MO and seemed poised to be a football star at the University of Missouri before the Cardinals enticed him to play pro baseball with a contract in 1958.

-He made his big league debut at age 22 in September 1962, collecting two singles and a walk in sixteen trips to the plate.

-Shannon fared better in an extended tryout during the final two months of the 1963 season, batting .308 as a late-inning replacement.

-During the Cardinals' championship season in 1964, he was sent back to the minors in May, but returned for good in July. Overall he started 59 games in left field and hit .261 with 9 home runs and 43 RBI.

-Mike played every inning of the seven-game 1964 World Series against the Yankees, a feat he would replicate in the 1967 and 1968 Fall Classics. In the sixth inning of Game One, he hit a game-tying two-run homer off of Whitey Ford, touching off a four-run rally that gave the Cards the lead for good.

-He switched to third base in 1967. A year later, his personal-best of 79 RBI led the Cardinals. He also achieved a new high with 29 doubles and placed seventh in MVP voting.

-Mike's career was prematurely halted in 1970 when the 30-year-old was diagnosed with nephritis, a rare kidney disease. In parts of 9 seasons he batted .255 with 68 home runs and 367 RBI.

-Shannon has been one of the radio voices of the Cardinals since 1972. After longtime partner Jack Buck's passing in 2002, the former player was named the lead radio broadcaster. He also owns a restaurant within walking distance of Busch Stadium. He was inducted into the Missouri Sports Hall of Fame in 1999. 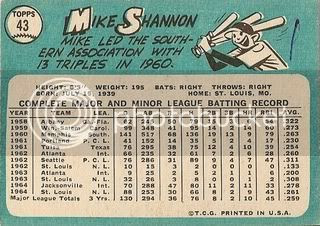