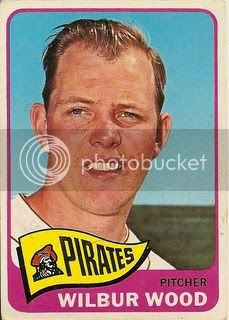 If you grew up in the 1970s, you probably find it hard to believe that Wilbur Wood was ever this young. Looking at the cards from his White Sox years, you'd probably assume that he sprung to life fully formed as a 40-year-old man.

-A native of Cambridge, MA, Wilbur signed with the Red Sox out of high school in 1960.

-In October 1966, the Pirates traded Wilbur to the White Sox, where his career finally took off after he switched exclusively to throwing the knuckleball. From 1968-1970, he led the American League in games pitched each season, including a then-record 88 appearances in 1968. He also led Chicago with 16, 15, and 21 saves, respectively and vultured 32 total wins with a 2.50 ERA.

-Skipper Chuck Tanner moved the knuckleballer to the starting rotation in 1971. Though Wood initially resisted, his low-stress delivery made him a dominant workhorse. That year he made the All-Star team for the first time and went 22-13 with 22 complete games and 7 saves. His 1.91 ERA translated to a league-leading 189 ERA+. Not bad for 334 innings of work!

-Showcasing his durability, he earned a pair of wins on May 28, 1973. The day began with the resumption of a suspended game from two days prior between Chicago and Cleveland. Wilbur pitched the last five innings and allowed a single unearned run, and a Dick Allen three-run homer in the bottom of the 21st clinched it. The tireless pitcher then got the start in the regularly scheduled game and tossed a four-hit shutout!

-The lefty had another unusual day on July 20, 1973. He started the first game of a doubleheader with the Yankees, but failed to retire a batter and was yanked after allowing six runs. The Sox ran him back out to start the nightcap, and he didn't fare much better, allowing 7 runs (5 earned) in 4.1 innings. That's how you lose two games in a single day.

-As he continued to devour innings in 1974-1975, his ERA climbed and his wins dropped. However, it was an unfortunate accident in May 1976 that threatened his career. A comebacker by Detroit's Ron LeFlore shattered his left kneecap and ended his season. 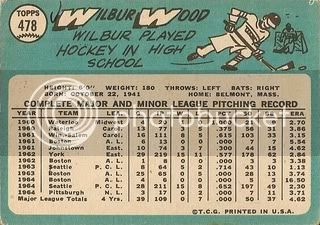