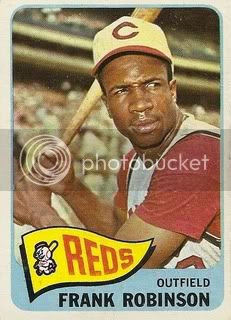 That's right, it's the baddest mamma-jamma to ever hike his stirrups up extra-high. This is Robby's last card as a member of the Reds; he was somewhat famously traded to Baltimore in the following offseason and appeared hatless and assigned to the Orioles in 1966 Topps.

-Frank was born in Beaumont, TX but attended McClymonds High School in Oakland, CA. He was on the same high school basketball team as Celtics legend Bill Russell, and the McClymonds baseball team featured an outfield of Robinson, Curt Flood, and Vada Pinson. The Reds signed all three young players, including Robinson in 1953.

-He made short work of the minor leagues, and earned the nod as Cincy's left fielder in 1956 at the age of 20. He was the unanimous choice for National League Rookie of the Year with a league-leading 122 runs scored. The first-year player also led his team with 38 home runs and a .558 slugging percentage and batted a robust .290 with a .379 on-base percentage. He was an All-Star for the first of 12 seasons, and finished 7th in MVP voting.

-After averaging 32+ home runs and 101 RBI in 10 seasons in Cincinnati, Robinson was shocked to be traded to the Orioles for a package headlined by Milt Pappas. Reds' owner Bill DeWitt famously explained the trade by asserting that the outfielder was "an old thirty". Frank got the last laugh, winning the Triple Crown in his 1966 American League debut (.316 AVG, 49 HR, 122 RBI). He also topped the A.L. in OBP (.410), SLG (career-high .637), runs (122), and total bases (367). His OPS+ was 198, meaning that he was practically twice as good as the average player in the league. He became the first (and to date, the only) player to win MVP awards in each league, and added the World Series MVP as well. He slugged .857 in the Birds' shocking four-game sweep of the Dodgers, setting the tone with a two-run homer off of Don Drysdale in the first inning of the first game and bookending the Series with a home run off of Drysdale to account for the only run in the clincher. It's fair to say that the O's would have won the trade even if he retired after that first season.

-One more milestone from the 1966 season: In the second game of a May 8 doubleheader against Cleveland, he hit a two-run homer off of Luis Tiant. It was the only fly ball to ever leave Baltimore's Memorial Stadium, and was marked with a flag that simply said "HERE".

-But Frank remained productive in Baltimore for another five seasons, although injuries and age brought his numbers closer to Earth. The Orioles won four pennants during his tenure, and won another World Series over his former team in 1970. He added two more home runs to his ledger in that Series, and ultimately finished his career with 10 home runs in 35 postseason contests.

-The aging slugger was traded three times in a three-year span near the end of his career, going from the Orioles to the Dodgers to the Angels and finally to the Indians. Prior to the 1975 season, Cleveland appointed him player-manager, making him the first African-American manager in major league history. During his final season on the active roster, he inserted himself into a June 11, 1976 home game against the White Sox. It was the bottom of the 13th, and Chicago led 4-3 with two outs and Larvell Blanks on first base. Manager Robinson pulled the right strings, sending up pinch-hitter Robinson to deliver a walk-off two-run home run against reliever Terry Forster! 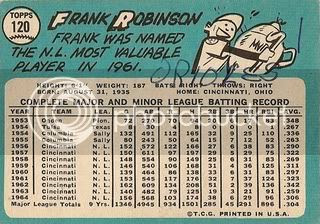