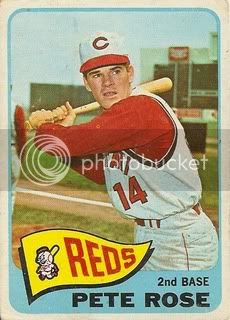 Uh-oh, Mad Max is back with another Hall of Famer! Frankly, I'm just happy to get back to one player per card. I've been stretching myself awfully thin, don't ya know. If you're keeping track of my progress in posting, this card arrived from Max in November 2009. But I really am closing the gap.

-Pete signed with his hometown Cincinnati Reds as a teenager in 1960.

-Other league-leading totals for Pete included runs scored (4x), doubles (5x), batting average (3x), and on-base percentage (2x). He even won a couple of Gold Gloves for his play in right field in 1969 and 1970. He also tied Wee Willie Keeler's National League record with a 44-game hitting streak in 1978.

-His most famous (and infamous) on-field escapade came in the 1970 All-Star Game, when he raced around the bases on a Jim Hickman single and plowed into Indians catcher Ray Fosse to jar the ball loose and score the winning run in the bottom of the 12th inning. Many fans and pundits hyperbolically claim that this incident stunted the 23-year-old Fosse's career, but that seems a bit much. Though he never again matched his numbers from that year (.307/.361/.469, 18 HR, 61 RBI), he did play for the rest of the decade and even picked up another All-Star nod and Gold Glove in 1971.

-Rose had five top-five finishes in MVP voting, and won the award outright in 1973 when he hit a league-best .338 with 115 runs scored for the National League West champs.

-Pete continued managing the Reds until being suspended by commissioner Bart Giamatti in 1989. A lengthy investigation (the Dowd Report) had revealed that Rose had been gambling on several sports, including baseball. He accepted a lifetime ban from the game in exchange for MLB not formally finding him guilty. He remains banned to this day, and is therefore ineligible for the Hall of Fame. Even his confessions of guilt in subsequent years have been conditional (i.e., he's never admitted to betting on his own team, despite evidence to the contrary) and have been dismissed by many as self-serving and insincere. However, the WWE inducted him into the celebrity wing of their Hall of Fame in 2004, in recognition of his recurring appearances as a sacrificial lamb to hulking wrestler Kane at various Wrestlemania events. So he's got that going for him. 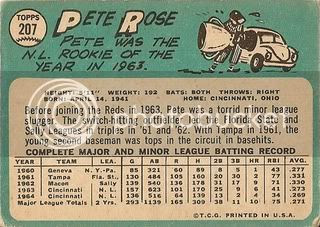