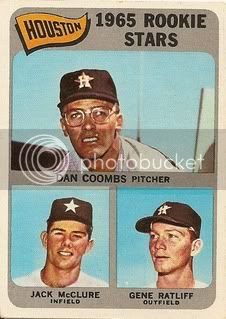 Yipes, it's a three-for-one! That's what I get for waiting around while Blogger righted itself over the weekend. Worth noting: I believe this is the first appearance of the Astros' cap logo in this set.

-Dan was born in Lincoln, ME and starred in baseball and basketball at Seton Hall University. He signed with the Colt .45s in 1963.

-Houston called the 6'5" lefty up to the big leagues in September 1963 after he won 10 games in Single-A. He appeared in one game, giving up a run in one-third of an inning.

-After six appearances as a long reliever with the Colts in 1964, Coombs started a game during the team's final series of the season in Los Angeles. On October 2, he scattered 6 hits and 2 walks in 5 scoreless innings to earn his first career win.

-Had a so-so season out of the Houston bullpen in 1965, putting up a 4.79 ERA in 26 games. Appeared in only eight games total over the following two seasons.

-Dan appeared in a career-high 40 games for the Astros in 1968, going 4-3 with 2 saves and a deceptive 3.28 ERA. It was the famous "Year of the Pitcher", so he actually came in higher than the leaguewide mark of 2.99. While he didn't give up many runs, he allowed 10 hits per 9 nine innings and had an underwhelming 1.7 strikeout-to-walk ratio.

-Twirled his only career shutout on May 9, 1970, two-hitting the host Expos in a 6-0 Friars win. In that game, he did not allow a hit over the final five innings.

-He was not much of a hitter, averaging .140 at the plate in the majors. He struck out six times in seven at-bats against Hall of Famer Bob Gibson, but made the last one count. On April 16, 1971, he doubled in his team's only run against Gibson. Unfortunately, St. Louis touched up Coombs for 6 runs in less than 3 innings and he took the loss.

-The Padres shipped Coombs back to the minors in 1971 after a rocky start, and it ultimately marked the end of his big league career. In parts of 9 MLB seasons, he was 19-27 with a 4.08 ERA.

-This one's a quickie; Jack played three minor league seasons and never made the majors.

-His nickname was "Kid".

-McClure split his first pro season between Single-A Modesto and AA San Antonio, hitting .258 in 66 games with a .342 slugging mark.

-Believe it or not, Gene played even fewer pro games than Jack McClure, totaling 106 in the minors and 4 in the majors.

-Improbably, he did have two cups of coffee with the Astros in 1965. In two pinch-hit appearances in May and another two in August, he was 0-for-4 with a golden sombrero: four strikeouts. He can take heart in knowing that he's not even close to the career hitless record for a non-pitcher: that goes to ex-Indian Larry Littleton (1981) and former Cardinal Mike Potter (1976-1977), each of whom went 0-for-23 in the big show.

-However, Gene is believed to hold the record for most at-bats by a non-pitcher, all resulting in a strikeout. 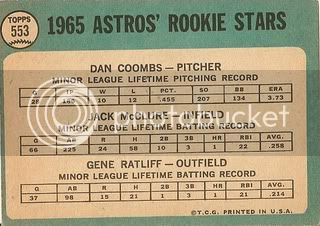