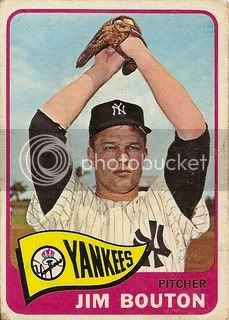 This is the first of two 1965 Topps cards that I acquired via trades on Topps' Million Card Giveaway site, last year's version of the Diamond Giveaway. I entered a code card that was pulled from a pack of 2010 Topps, and was awarded a 1964 Topps Wade Blasingame. Since I already had Wade's 1965 card and the drab '64 design is one of my least favorite, I offered it up for trade for various 1965s that I needed. Someone took the bait, and I got Jim Bouton in return! I waited until the March 2011 deadline to order shipping on the batch of cards that I had unlocked and/or traded for, and they arrived six weeks later. As you can see, this one isn't in great shape, but it's certainly not the worst-kept specimen in my set.

-Jim was born in Newark, NJ and attended Western Michigan University before signing with the Yankees in 1959.

-His intellectual, sarcastic, and iconoclastic behavior frequently made him conspicuous in the clubhouse, and arm troubles in the mid-1960s made him expendable in the eyes of the Yankees. While pitching for AAA Seattle in 1968, he began throwing a knuckleball in order to be effective. He was to spend much of the 1969 season in the Pacific Northwest, but this time with the Pilots, a first-year club in the American League. Used mostly in relief, he went 2-1 with a save and a 3.91 ERA. He was traded to Houston for the stretch run and had a 4.11 ERA in 30.2 innings for the Astros.

-Of course, Bouton kept a running diary of that 1969 season, and it was published as "Ball Four". It was a best-seller and a groundbreaking look inside major league clubhouses. The "old-boys" network in baseball was furious, with players and executives alike feeling that he had abused trust and privacy and painted the sport and its people in an unflattering light. He put up a 5.40 ERA in 29 games with the Astros in 1970, and following the publication of his book, could not latch on with another team.

-Throughout the 1970s, Jim continued pitching in semipro ball. He got a minor league deal from Bill Veeck in 1977, and the following year the similarly free-thinking Ted Turner signed the knuckleballer. He made it all the way back to the big leagues in September 1978, making 5 starts for a bad Braves team. The 39-year-old went 1-3 with a 4.97 ERA, earning his only win with a single unearned run allowed in 6 innings on September 14 against the Giants.

-He's had a varied and fascinating life outside of the lines. He wrote several more books, both fiction and non-fiction, and during the 1970s he dabbled in acting, co-starring in the 1973 film The Long Goodbye and co-writing and appearing in a short-lived 1976 sitcom based on "Ball Four". He also spent a few years as a sportscaster in New York and invented  several products including Big League Chew, bubble gum that was shaped and packaged like chewing tobacco.

-You can read more about Jim at his official website. By the way, he reconciled with Mickey Mantle shortly before the slugger's death in 1995, and the Yankees finally welcomed him back to Old Timers' Day in 1998. 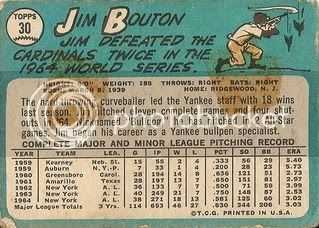