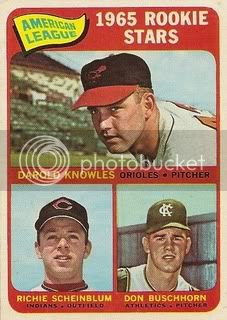 I'm pretty sure this is the only three-team rookie card in the set.  Topps was clearly trying to fill out the set by the time they got to the seventh and final series.

-Darold was born in Brunswick, MO and attended the University of Missouri before signing with the Orioles in 1961.

-Knowles was traded to the Senators prior to the 1967 season. In four full seasons in Washington, he never posted an ERA higher than 2.70.

-Posted a personal-best 1.37 ERA for the 1972 Athletics while serving as a setup man for Rollie Fingers, and also notched 11 saves. A late-season thumb injury kept him out of the World Series.

-Despite starting only eight games in his career, he did hurl a shutout: on August 14, 1973 he scattered six hits and five walks to blank the Red Sox despite striking out just one batter. The A's won 1-0 on a sixth-inning squeeze by Dick Green that was mishandled by hard-luck Boston starter Bill Lee.

-Pitched in his only Fall Classic in 1973, but made it count. He became the only pitcher in major league history to appear in seven games in a single World Series, notching two saves and only allowing one unearned run in six and one-third innings as the A's outlasted the Mets.

-Darold has coached for the Cardinals (1983) and Phillies (1989-1990). In recent years, he's been a minor league pitching instructor in the Pirates and Blue Jays organizations.

-A native of New York City, Richie attended Long Island University's C.W. Post Campus and signed with the Indians in 1964.

-Began the 1969 season on the Cleveland roster, but endured an 0-for-34 start to the year. He finished the season with a .186 average and 13 RBI, spending most of the year as a pinch hitter.

-Joined the Royals in 1972 and became the team's everyday right fielder. It was his only season as a regular, and he made the All-Star team by hitting .300 with a .383 on-base percentage.

-He began the 1973 season relegated to the Reds bench, but gained the Angels' starting right field job following a June trade and hit .328 with a .417 on-base percentage in 77 games in California.

-Scheinblum split the 1974 season between the Angels and Royals, and finished with a six-game run with the Cardinals. He hit only .183 in what would prove to be his final big league season. In parts of 8 seasons, he batted .263 with a .343 on-base percentage, 13 home runs, and 127 RBI.

-Capped his career with a two-year stint with the Hiroshima Carp in Japan, batting .295/.349/.468. He was the first player to homer from both sides of the plate in one game in the Japanese league.

-After his baseball career ended, Richie opened a jewelry store in Anaheim. Eventually he settled in Palm Harbor, FL and worked for a company that applied logos to clothing items.

-Don was born in Independence, MO and signed with the Athletics out of high school in 1964.

-After pitching only 15 minor league games, he was promoted to the big leagues, making his debut on May 15, 1965 against the Twins. He got the start, gave up two runs in five innings, and was saddled with the loss in a 2-0 game.

-Buschhorn stayed in the majors until early August, appearing in 12 games with a 4.35 ERA in 31 innings. It was his only exposure to the major leagues. 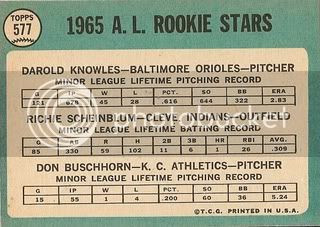