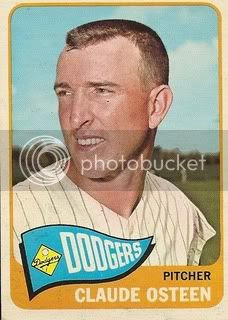 You don't see many Claudes in baseball. The last was Claude Jayhawk Owens, a catcher for the Rockies in the mid-1990s. However, he went by Jayhawk, or simply "J". It's the same story for Blue Jays pitcher Claude Lee "Butch" Edge (1979), and Mets and Brewers pitcher Claude Edward "Skip" Lockwood (1969-1980). In fact, Claude Osteen was the most recent major leaguer to go by that name. This has been "Know Your Claudes".

-Claude was born in Caney Springs, TN. He signed with Cincinnati in 1957 before his 18th birthday.

-The Redlegs gave him a couple cups of coffee in his first pro season, and he allowed one run in three relief appearances.

-Osteen never did crack the Cincinnati rotation, and was traded to the Senators in late 1961. Still in his early twenties, he became a dependable starter for the bottom-dwelling Washington club. In three-plus seasons in D.C., he went 33-41 with a 3.46 ERA; that included a team-leading 15-13 record with a 3.33 ERA and 13 complete games in 1964.

-He was dealt to the Dodgers prior to the 1965 season, with Frank Howard heading to the Senators. The lefty wasted no time entrenching himself in the L.A. rotation, putting up sub-3.00 ERAs (2.79, 2.85) and a total of 34 wins in his first two years with the club. He would ultimately post double-digit wins in each of his nine seasons as a Dodger.

-Claude one-hit the Giants on June 17, 1965, permitting only a Jack Hiatt single in the second inning. He did walk 5 batters, but retired 11 in a row to end the game.

-Was a hard-luck pitcher in World Series play. In Game Three of the 1965 Series, he blanked the Twins on five hits to help Los Angeles begin its climb from a 2-0 Fall Classic deficit. Three days later, he had a chance to clinch the title, but exited after five innings trailing 2-0, with one run unearned as a result of a Dick Tracewski error. He was tagged with a loss, as the final was 5-1 Twins. A year later, he again got the ball in Game Three with the Dodgers in a 2-0 hole. This time he allowed only three Orioles hits in seven innings, but one of those was a solo home run by Paul Blair. It was the only run of the game, with the O's winning 1-0 en route to a sweep. So Osteen has a 1-2 Series record with a 0.86 ERA!

-After retiring, he served as a pitching coach for several major and minor league teams, including the Cardinals, Phillies, Rangers, and Dodgers. 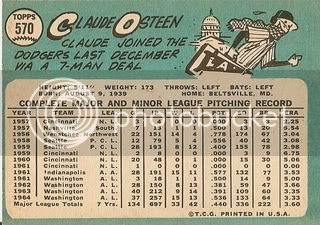