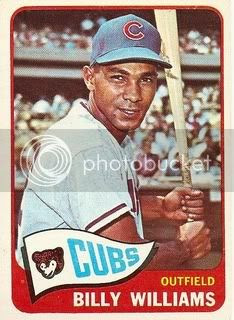 Just like that, we're back to the Hall of Famers. As a younger(ish) baseball fan, Billy Williams seems to be a great player who's become overshadowed. Even on his own team, he was dwarfed by larger-than-life personalities like Ernie Banks and Ron Santo. Thoughts?

-A native of Whistler, AL, Billy was a teenager when he signed with the Cubs in 1956.

-He set a National League record by playing in 1,117 consecutive games between 1962 and 1971. Steve Garvey eventually surpassed his mark in 1983.

-Claimed another Senior Circuit record by hitting five home runs over the span of two games, Sept 8 and Sept 10, 1968. Remarkably, Leo Durocher replaced him in left field with Jose Arcia in the eighth inning of the latter game; it became moot, as Williams' spot in the batting order did not come up again before the end of the contest.

-April 6, 1971 saw the Cubs and Cardinals put on an Opening Day classic. Fergie Jenkins and Bob Gibson dueled into the tenth inning with the score tied 1-1. In the bottom of the tenth, Williams won the game with a solo home run off of Gibson, one of ten career homers he hit off of the St. Louis ace.

-Williams spent the final two years of his career as a designated hitter in Oakland, participating in the 1975 ALCS for his only postseason experience. He retired in 1976 with a .290 average, .361 on-base percentage, and .492 slugging. He totaled 426 home runs and 1,475 RBI. 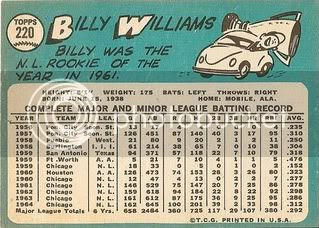