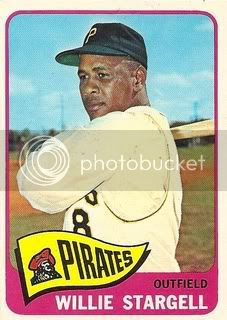 Okay, one last Hall of Famer in this great batch from Max! Being a younger collector, it's always a neat contrast to see much older cards of players whose primary image comes from their veteran years, like Willie Stargell or Gaylord Perry. After all, Willie was popularly known as "Pops".

-A native of Earlsboro, OK, Willie attended high school in California before signing with the Pirates in 1958.

-He debuted with Pittsburgh in September 1962, and made the National League All-Star team for the first of seven times in 1964, his first season as a regular starter. He hit .273 that year and led all Pirates with 21 home runs. His 78 RBI trailed only Roberto Clemente (87) for the team lead.

-Late in his career, the outgoing Stargell became "Pops", the key on-field leader of the strong Pittsburgh clubs of the late 1970s. He gave out small yellow star patches to reward teammates for good play, and the stars were affixed to the team's black pillbox caps. He was also responsible for the adoption of Sister Sledge's "We Are Family" as the team's rallying song in the 1979 championship season. (As an Orioles fan, I'm glad I wasn't around for that.)

-He finally won his MVP award in 1979, sharing the honor with Cardinals first baseman Keith Hernandez. Willie hit .281 that year with 32 homers and 82 RBI. Ironically, it was one of his least impressive seasons statistically. Of course, he was undoubtedly rewarded for his role as a team captain, and for producing those numbers at age 39. He capped the year off with a .455 average (5-for-11) with two homers, two doubles and six RBI in an NLCS sweep of the Reds, followed by a .400 mark (12-for-30) with four doubles, three homers, and seven RBI in the seven-game World Series victory over the Orioles. He was named NLCS MVP and Series MVP, with his Game Seven performance (4-for-5, 2 2B, the eventual game-winning 2-run HR) cinching his Fall Classic honors.

-He retired after the 1982 season, his 21st in a Pirates uniform. The team immediately retired his #8 jersey. His career totals included a .282 average, .360 on-base percentage, .529 slugging percentage, 475 home runs, and 1,540 RBI. He is Pittsburgh's all-time leader in career home runs and RBI.

-He was famous for not just the frequency of his home runs, but also the sheer magnitude. He hit 7 of the 16 balls to ever leave Forbes Field, and often reached the upper deck in Three Rivers Stadium. He holds the distance records at Dodger Stadium (507 feet), Veterans Stadium (unknown), and Olympic Stadium (535 feet). As Don Sutton once said, "He doesn't just hit pitchers, he takes away their dignity."

-Stargell spent several years as a Braves coach, and was a first-ballot Hall of Famer in 1988.  Later in life, he suffered from kidney trouble, and died at age 61 on April 9, 2001. That same day, the Pirates opened their new stadium, PNC Park, and dedicated a statue in his likeness on the premises. 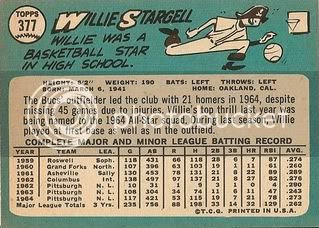