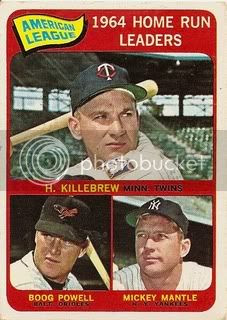 I received this card as part of a generous gift from Dean of Dean's Cards. He also sent along some vintage Orioles that I needed, and all he asked for in return was a link exchange. You can check out his blog here. Thanks, Dean!

This is a bittersweet posting, coming the week after Harmon Killebrew's cancer-related death. But at least it allows us to celebrate his skills as a power hitter. In 1964, Harmon led the American League for the fourth time in his great career and the third straight season. He set a career high with 49 longballs, 30 of them coming before the All-Star break. He was hottest in May (12 HR in 26 games) and June (14 HR in 30 games). With 24 homers coming with runners on base, nearly half of his total four-baggers put crooked numbers on the board. He feasted on Boston pitchers, victimizing them 9 times in 18 games. Before all was said and done, he would win a fifth home run crown in 1967 (44) and a sixth in his MVP year, 1969 (49), retiring in 1975 with 573 career HR.

Orioles slugger Boog Powell was a distant runner-up with 39 homers, but that total represented a career high. He did lead the American League with a .606 slugging percentage in 1964, and probably would have given Harmon a run for his money if he hadn't missed 28 games with injuries in mid-June and late August. He made the most of the 21 games he did play in June, going deep 12 times that month. He drove in other runners with 18 of his homers, but somehow went hitless in 10 at-bats with the bases loaded. He feasted on the arms of the lowly Senators, clouting 10 round-trippers in 18 games against Washington. Boog retired after failing to hit a home run in 1977 with the Dodgers; still, he amassed 339 HR in his career. He reached double digits in homers in 14 straight seasons - every year in which he played at least 100 games.

The third-place finisher was Mickey Mantle with 35 homers; it was the last time he topped 30 in his legendary stint with the Yankees. With years of wear and tear beginning to take their toll, the 32-year-old played in 143 games, finishing with 115 less plate appearances than Killebrew. A four-time home run king, Mantle was remarkably consistent in 1964. He hit 16 balls over the fence at Yankee Stadium and 19 on the road. 17 came in the first half and 18 in the second half. After going homerless in eight April games, his totals for the following months were eight, seven, five, eight, and seven. 17 longballs came with the bases empty, and 18 with men on. His most frequent whipping boys were the Kansas City Athletics, whom he clobbered 7 times in 16 games. The Mick retired in 1968 with 536 career home runs, but there's no telling how many he would have hit with better health.

Topps did something neat with the leaderboard on the back, listing each of the 25 American Leaguers who hit at least 20 home runs, and then accounting for all of the grand slams hit in 1964. As you can see, Boston's Dick Stuart and Chicago's Pete Ward tied for the lead with three grannies apiece. Surprisingly, Red Sox catcher Bob Tillman and A's center fielder Nelson Mathews were the only others to hit more than one grand slam. 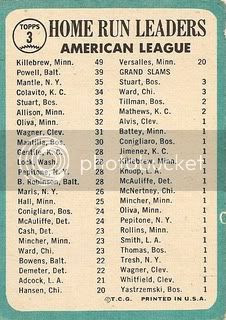