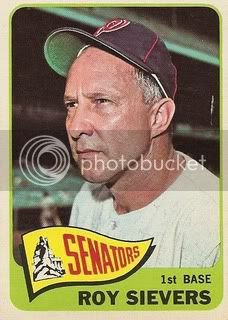 There's a little snow on the mountain for venerable veteran Roy Sievers, who would have been 37 when this photo was taken. Bonus fun fact: Roy was only two and a half years younger than his manager in Washington, Gil Hodges!

-A St. Louis, MO native, Roy signed with the hometown Browns as a teenager in 1944.

-He struggled mightily in his sophomore season, later claiming that Browns coaches had tried to tinker with his swing. He barely played over the next two seasons due to injury, and was traded to the Senators after hitting .270 with 8 home runs in 92 games in 1953.

-Had his career year in 1957, batting .301/.388/.579 with a league-leading 42 home runs and 114 RBI. He made the second of his four All-Star teams, and was third in MVP voting. He later joked to Ted Williams that the "Splendid Splinter" had cost him the Triple Crown; Williams had outhit him by a mere 87 points.

-Roy hit 10 walk-off home runs in his career; only six players have ever had more.

-Among his brushes with fame: He was Tab Hunter's batting double in the movie version of "Damn Yankees", and during his time with the Senators was then-Vice President Richard Nixon's favorite player.

-He is one of four players to hit pinch grand slams in both the American and National Leagues. Went deep off of Cleveland's Johnny Antonelli on June 21, 1961 in a 15-3 White Sox rout; two years later, he victimized Cincinnati's Bill Henry in a 10-4 Phillies victory. The rest of the unlikely list: Jimmie Foxx, Kurt Bevacqua, and Glenallen Hill.

-Spent the 1966 season coaching for the Reds, and then managed for four seasons in the minors for the Mets and Athletics. He later worked for Yellow Freight Company in St. Louis, and has been enjoying retirement since 1986. He wore a Browns uniform in old-timers' games for several years. 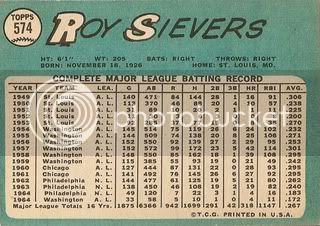