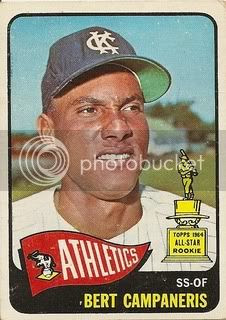 Campy! Rookie Trophy! Did you know that his birth name is "Dagoberto"? That's pretty awesome. This sharp-looking card comes from Pirates fan Dan M. He also sent me some unmarked checklists as upgrades, and a few vintage Orioles to fill some needs. Thank you muchly, Dan!

-A native of Pueblo Nuevo, Cuba, Bert was a teenager when he signed with the Athletics in 1961.

-Bert had quite a debut on July 23, 1964, homering off of Jim Kaat in his first and fourth at-bats to become the second player ever to go deep twice in his first major league game. He finished 3-for-4 with 3 RBI, a steal, and a walk.

-The young Campaneris made a stronger impact in his sophomore season, hitting .270 and leading the American League with 12 triples and 51 steals. It was the first of 6 stolen base crowns for him, and the first of 11 seasons with at least 34 swipes.

-On September 8, 1965, he became the first player to see time at all nine positions in a single game, as part of an attendance stunt. He pitched the eighth inning, alternating throwing lefty and righty depending on the handedness of the batter. He allowed a run on one hit and two walks and struck out Bobby Knoop. In the ninth, he moved to catcher with the A's trailing 3-1. Ed Kirkpatrick walked, stole second on Campy, and advanced to third on a fly ball. With two outs, Kirkpatrick and Tom Egan tried a double steal. On the relay back home, the ersatz catcher tagged the runner out, but was banged up in the resulting collision and left the game. K.C. rallied to tie the game, but lost 5-3 in 13 innings. Overall, Bert recorded putouts at first base, catcher, left field, and center field, muffed a flyball in right field, and walked, stole a base, and scored a run in four trips to the plate.

-Made the first of six All-Star teams in 1968, when he achieved career highs and league-best totals of 177 hits and 62 steals.

-In Game Two of the 1972 ALCS, he had three hits, two steals, and two runs. Detroit pitcher Lerrin LaGrow hit him on the ankle with a pitch in the seventh inning, and he responded by throwing his bat at LaGrow. Campy was ejected, and tussled with Tigers manager Billy Martin in the ensuing melee. He was fined and suspended for the duration of the series as well as the first seven games of the following season, but was permitted to play in the 1972 World Series. 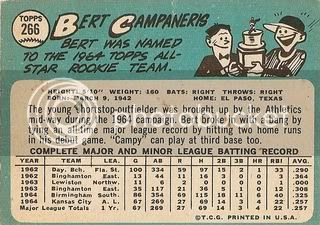