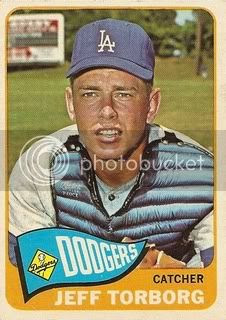 I scheduled this card to post on Thursday, but it got lost in the ether during the Terrible Blogger Outage. Please excuse its lateness...I'm sure it's just an optical illusion, but the left side of Jeff Torborg's chest protector looks much wider than the right.


-Jeff was born in Plainfield, NJ and attended Rutgers University, then signed with the Dodgers in 1963. It's been reported that his signing bonus was a lofty $100,000.


-He played only 64 minor league games before debuting with Los Angeles in May 1964. He saw action in only 28 games as a rookie third-string catcher behind Doug Camilli and starter Johnny Roseboro, and hit .233 with 4 RBI.


-He was best-known as a player for catching three no-hitters: Sandy Koufax's perfect game in 1965, Bill Singer's 10-strikeout gem in 1970, and Nolan Ryan's first career no-no in 1973. Only current Red Sox catcher Jason Varitek (with four) has caught more in major league history.

-Jeff drove in a career-high four runs on July 30, 1970, fueling a 7-3 win over the Expos. His three-run homer off of Dan McGinn was the only round-tripper the catcher hit that year, and he added a run-scoring single later in the game.

-He probably didn't mind riding the bench when Jim Kaat was pitching, having gone 0-for-12 against the 283-game winner.

-He got into coaching, serving on the big league staffs of the Indians and Yankees. More recently, he was a TV analyst for MLB games on FOX and the Braves' regional broadcasts.

-His son Dale has the most interesting resume in the family. He played first base at Northwestern University and for parts of two seasons (1994-1995) in the low minors with the Mets. He spent the rest of the decade as a professional wrestler with the encouragment of Hulk Hogan and Macho Man Randy Savage, and was best known for a stint in the now-defunct WCW as the Kiss Demon. After suffering a knee injury, he returned to baseball as a trainer for his father's teams in Montreal and Florida, and has been the minor league conditioning coordinator for the White Sox since 2004. 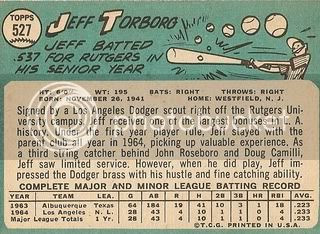