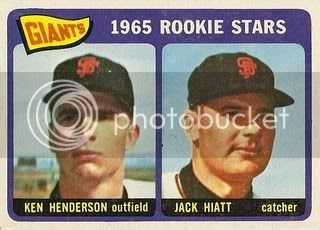 As I rifle through my baseball card collection, I find a very different-looking Ken Henderson another decade or so down the line from his rookie card. 1970s cards really are the gift that keeps on giving.

-Ken was born in Carroll, IA, but attended high school in San Diego before signing with the Giants in 1964.

-Despite struggling greatly in his first pro season (.191 AVG/.268 SLG), he was jumped from Rookie ball to A to AAA in short order that year.

-San Francisco was sufficiently enamored with Henderson to keep him on the big league roster for the whole 1965 campaign, but used the 19-year-old sparingly. He batted .191 with a .277 on-base percentage in 83 trips to the plate. In a rare start on August 17, he went 2-for-4 with a run scored and a two-run double to account for all of the Giants' runs in a 3-2 victory over the Mets.

-Joined the White Sox (along with Steve Stone) in a deal for pitcher Tom Bradley. Injuries cost him half of the 1973 season, but he rebounded to play all 162 games a year later. Ken hit .292 that year with 20 homers and a team-high 95 RBI while leading the American League in putouts by a center fielder.

-A switch-hitter, Henderson homered from both sides of the plate in a 4-2 victory over the Orioles on August 29, 1975. He got to lefty Ross Grimsley in the first inning, and victimized righty Wayne Garland in the eighth.

-On September 2, 1978, he hit a three-run pinch home run in the top of the 12th inning to lead the Reds to a 6-3 win over the Cardinals. It was one of five pinch homers in Ken's career.

-His cousin Kerry Dineen was an outfielder who played 16 games with the Yankees and Phillies, 1975-1978.

-Ken has worked in sales and marketing since hanging up his spikes, rejoining the Giants last year to sell luxury box suites at AT&T Park. He is married with four children and five grandchildren.

-Jack was a Bakersfield, CA native who signed with the Angels as a teenager in 1961.

-He was a very strong minor league hitter, compiling a career average of .299 and routinely reaching base above a 40% clip.

-The Angels called him up for the first time in September 1964, on the heels of a 23-homer season at AAA Hawaii. He notched 6 hits and 2 walks in 18 trips to the plate, including a walkoff pinch single off of Boston's Bob Heffner in his debut on September 7.

-Was traded prior to the 1965 season, going to the Giants in exchange for Jose Cardenal. Got very little playing time in San Francisco, totaling 290 plate appearances in 131 games from 1965-1967. Performed well in those limited opportunities, with a .280 average and .390 on-base percentage.

-Continued playing in the minors through the 1974 season. 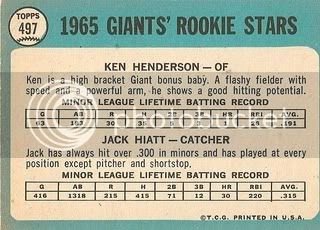