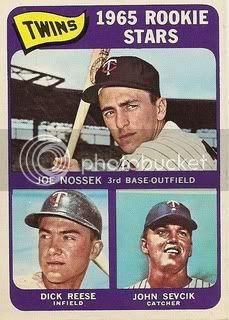 And so we come to the penultimate card in the 1965 Topps set, which also happens to be the last card in the awesome bundle sent by Max. Thanks again, Max! Looking forward, I have less than 40 cards waiting in the queue to be posted. Believe it or not, that's a great deal of progress! I might even be caught up by the end of the summer...

-A Cleveland native, Joe attended Ohio University and signed with the Twins in 1961.

-His Minnesota teammates called him "Coffee and Juice" because he ate so sparingly.

-Made the Twins' Opening Day roster in 1964 at age 23, but was sent back to the minors in May after seeing action in seven games, with six coming as a pinch runner or defensive replacement.

-He started five out of seven World Series games for the Twins in 1965, manning center field in place of All-Star Jimmie Hall. Went 4-for-20 (.200), which includes a pinch single off of Don Drysdale in Game Four.

-After hanging up his spikes, Joe managed the Brewers' Class A Danville Warriors in 1972. The club went 73-52 and won the Midwest League championship.

-Also got a brief run as interim manager of the White Sox in early 2000 when regular skipper Jerry Manuel was indisposed.

-Better known as "Rich", Reese was born in Leipsic, OH and signed with the Tigers in 1962.

-Debuted with the Twins in September 1964, weeks shy of his 23rd birthday. Totaled only 27 games in his first three major league seasons.

-Had five different games with four hits in 1969. Went 4-for-4 with a pair of home runs on August 13 in a 5-2 win over the Yankees, and followed with singles in each of his first three at-bats in the next game before flying out to center field in his final trip to the plate.

-Also reached double-digit homers in 1970 and 1971, but his peripheral numbers slipped, with his average plunging to .219 in the latter year.

-Tied a big league record with three pinch hit grand slams in his career. The first of these came on August 3, 1969 in the bottom of the seventh against Baltimore's Dave McNally. It came with the Twins trailing 1-0, and was the decisive blow in halting McNally's 17-game winning streak.

-He was on the other end of history as well. On May 8, 1968, he struck out looking as a pinch hitter for the last out of Catfish Hunter's perfect game. On September 27, 1973, he was the record-breaking 383rd strikeout victim of Nolan Ryan in the Angel hurler's final appearance of the season.

-His birthday is September 29. The only two players born on that day with more career home runs are Rob Deer (230) and Warren Cromartie (61).

-Got into the distilling business, retiring in 2003 as CEO of Jim Beam Brands, headquartered in the Chicago area.

-A native of Oak Park, IL, John attended the University of Missouri before signing with the Twins in 1964.

-His twin brother James was an outfielder who also signed with the Twins in 1964. He played pro ball for four seasons, never rising above Single A.

-After batting .284 with a .385 on-base percentage at Class A Wisconsin Rapids in his first pro season, John made the big leagues as Minnesota's third catcher. He appeared in a dozen games, collecting a single hit in 16 at-bats (.063).

-That lone big-league hit was a double off of the Orioles' Wally Bunker on September 28, 1965.

-Sevcik played out the rest of his pro career in the minor leagues, hanging on for six more years and finishing with a minor league average of .266 and 22 homers and 196 RBI.

-As of 2005, he was living in San Antonio and working as an executive for Jim Beam. I wonder if Rich Reese got him in? 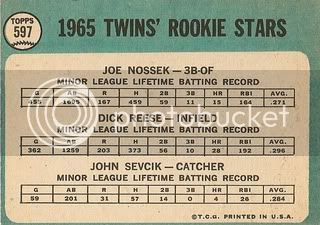