The two-for-one rookie cards that feature one guy who made it in the big leagues and another who never gained a foothold are a bit cosmically cruel. I guess it serves as a reminder that prospecting is a crap shoot.

-Willie was a Los Angeles native who signed with the Dodgers out of high school in 1964. The scout who signed him was none other than Tommy Lasorda, and Crawford signed for a $100,000 bonus.

-On May 16, 1969, he batted in the bottom of the ninth inning against Pittsburgh's Ron Kline. With one out, a runner on first, and the Dodgers trailing 3-2, Willie hit a game-winning home run.

-He went 2-for-6 in the 1974 World Series, including a ninth-inning home run off of Rollie Fingers in Game 3. His blast narrowed Oakland's lead to 3-2, but the Dodgers could get no closer.

-After spending parts of a dozen seasons in Los Angeles, Crawford was dealt to the Cardinals for the 1976 season. He responded with a .304 average, 9 home runs, and 50 RBI in 120 games.

-John was born in Highland Park, MI but attended high school in San Pedro, CA. He went on to the University of Southern California, where he was an All-American third baseman, and signed with the Dodgers in 1960.

-John earned the Dodgers' starting third base job in the spring of 1964, and singled off of Ernie Broglio in his first career at-bat on April 14.

-Unfortunately, the hits proved to be few and far between. He was demoted to Spokane in early June with a .193 average, no home runs, and 8 RBI in 29 games.

-Werhas had only a September cup of coffee with L.A. in 1965, going hitless with one walk in four plate appearances.

-Began the 1967 season in the big leagues, and was traded from the Dodgers to the Angels in early May for former college teammate Len Gabrielson.

-John batted a miserable .159 in 56 games that year, with a pair of home runs and 6 RBI. He was through as a major leaguer, with a cumulative .173 average and .276 on-base percentage in parts of three seasons.

-He continued playing in the minors through the 1973 season, spending most of his time at AAA Hawaii - not bad work if you can get it! He also spent the 1971 season in Japan with the Taiyo Whales, and was traded back to Hawaii for Clete Boyer. It was said to have been the first trade between an American team and a Japanese team. 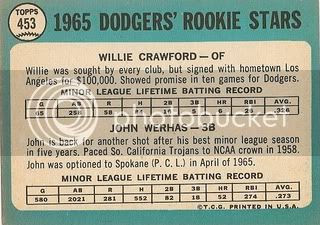