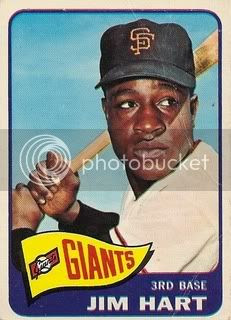 For some reason, I'm really drawn to the bright blue sky behind Jim Hart. There aren't many cards in this set with such a clear backdrop.

-He debuted with San Francisco in mid-1963 but had a rude initiation. In his second game, a Bob Gibson fastball broke his shoulder blade. He missed more than a month, and then was beaned by Curt Simmons in his fifth game back and missed the balance of the season!

-His second season in the big leagues went more smoothly. He finished a distant second to Dick Allen in Rookie of the Year voting with a .286 average, 31 home runs, and 81 RBI.

-Jim avoided the sophomore slump in 1965, leading the team with 30 doubles. He also boosted his average to .299. Although he dropped to 23 home runs, his 96 RBI trailed only Willie Mays for the team lead.

-A fourth straight standout year saw Jim hit 29 home runs and achieve career highs of 98 runs scored, 99 RBI, and a .373 on-base percentage in 1967. He paced the Giants in runs and RBI.

-Hart had a game for the ages on July 8, 1970 against the Braves. In just his second game after missing the first half of the season with injuries, he hit for the cycle in a 4-for-5 effort and drove in 7 runs as the Giants romped 13-0.

-He struggled with his weight and shoulder injuries in his late twenties, both of which hampered his already-suspect defense and cut into his playing time. He totaled only 131 games from 1970 through 1972.

-Hart worked as a warehouse man for Safeway Stores in California until his retirement in 2006. 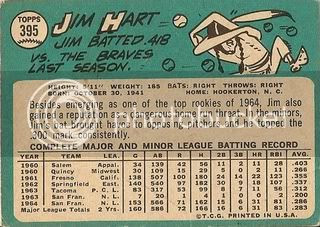